AFRICA MUST PRODUCE OR PERISH

Imagine that it is May 25, 2063, the 100th anniversary of Africa Day, a day for reflecting on Africa’s successes and failures. The newspaper headline announces, “Last Remaining Oilfield in West Africa’s American Territory Dries Up.”

The article continues: “The last patch of rainforest will soon be empty land scarred by oil pipelines, pumping stations, and natural gas refineries. Wholesale pollution will be the environmental legacy for future generations.

“In a world without oil, air travel will disappear, and people will voyage overseas on coal-powered ships. Farmers will use horses instead of tractors, and scythes instead of combine harvesters. As crops diminish and populations soar, famine will grip the globe. With no means to power their vehicles, parents will be housebound, without jobs, and children will walk to school.”

This scenario could become a reality, because we no longer have an abundant oil supply. We know oil exists in limited quantities and that most oil wells dry up after 40 years. It is as certain as death and taxes. Rather than debate the exact year when we will run out of oil, I prefer to imagine that we have already run out. It may come sooner than any of us expect. Our heirs will thank or curse us for how much oil we left for them. Instead of asking, “When will Africa run out of natural resources?” we should ask, “When will Africa be unable to export raw materials, either for lack of our own oil or because foreign markets have themselves dried up?” 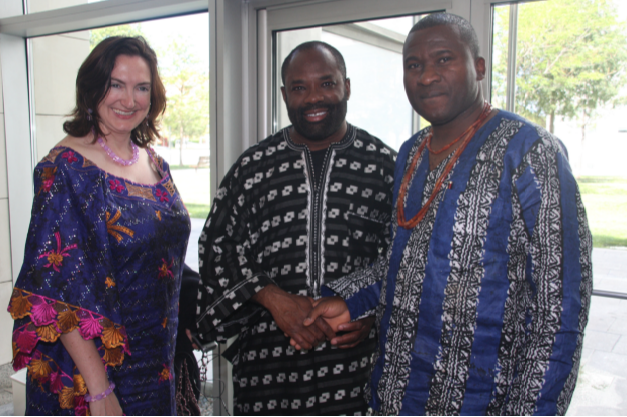 Without African intellectual capital, iron excavated in Africa will continue to be manufactured in Europe and exported back to Africa at enormous cost. To alleviate poverty, Africa needs to cultivate creative and intellectual abilities that will allow it to increase the value of its raw materials and to break the continent’s vicious cycle of poverty. Poverty is not an absence of money, Rather, it results from an absence of knowledge.

In oil-exporting African nations, multinationals such as Shell (selling rigs for a 40% royalty on exported oil) are getting rich, while the oil rig workers remain poor. Instead of addressing the underlying causes of poverty – minimal productivity resulting from a lack of intellectual capital – Third World leaders have focused on giving false hope to their people.

We need less talk about poverty and more action to eliminate it. So how do we do this? Education has done more to reduce poverty than all the oil companies in the world. So it is disheartening to realize that few leaders believe that their people’s potential is far more valuable than what lies beneath the soil.

ourselves. Intellectual capital will result in the creation of new products derived from new technologies. The end result will be not just a redistribution of wealth, but the creation and control of new wealth.

And Africa’s power to reduce poverty will open the floodgates of prosperity for millions of people. One catalyst for such prosperity could be telecommuting. If 300 million Africans could work for companies located in the West (just as millions of Indians do), then both regions would benefit. The strategy would be to recognize the labor needs of the global marketplace, and enable Africa to fulfill those needs.

For example, tax preparation experts living in Africa, where labor is cheaper, could fulfill the needs of US-based accountants. Furthermore, the time difference could allow for a fast turnaround in service. It is clear that knowledge and technology is crucial to alleviate Africa’s poverty.

Africa will perish if it continues to consume what it does not produce, and produce what it does not consume. The result will be a depressing cycle of increasing consumption, decreasing production, and increasing poverty. We are missing a golden opportunity by not using the trillion dollars earned by exporting natural resources to break Africa’s cycle of poverty.

We are at a crossroads where one signpost reads “Produce” and another reads “Perish.” We risk becoming like the driver who stops at an intersection and asks a pedestrian, “Where does this road lead?”

And the pedestrian replies, “Where do you want to go?”  “I don’t know,” the driver replies.

“Then it obviously doesn’t matter which road you take!” replies the pedestrian.

If we adopt the same attitude as the driver, Africa will have lost its chance to “choose” its future.

Africa’s choice is clear: produce or perish. However, it is important that we do not blindly choose the lesser of two evils – producing what we cannot consume or consuming what we cannot produce. We can avoid this. My wish is that by the end of the 21st century high-end products in New York City will sport the label: “Made in Africa.”

We cannot look forward to our future until we learn from our past. Five thousand years of recorded history reveal that technology was ancient Africa’s gift to the modern world. Forty and a half centuries ago, geometers in Africa’s Nile Valley region designed the Great Pyramid of Giza, the last of the Seven Wonders of the Ancient World. That manmade mountain remains the largest stone building on Earth. It is an icon of engineering, and testifies that Africa was once the world’s most technologically advanced region.